Posted by Chris Hutchinson at 11:47 AM No comments:

If we are to take contemporary writing at its word, then Chris Hutchinson is among its foremost practitioners, forsaking the certainties of space, time and locus for that collective unconscious known as the internet. This is fleet-of-foot, informed writing — tomorrow’s writing today — that draws on a broad cultural reference range, a dual diagnosis of mental illness and drugs collaged from a million little pieces. Like his book’s titular character, Hutchinson is a writer who has “lived with himself long enough to know that he is somehow different, and that there is no escaping.” ~ Michael Turner, author of 8 x 10

"Hutchinson's poems read as though written by a benign, alien intelligence: different from our own, faraway, yet nonetheless in awe of what it best understands. If we don't tune-in to these wonderful, unexpected frequencies, then we are probably doomed.”~Paul Vermeersch

Reviews of A Brief History of the Short-lived

"Chris Hutchinson's second collection of poems is remarkable for its lyric foldings, its lyric expansions, both of which permit a sort of vivid time travel where wisdom collects and stands against sadness and happiness — this is the logic of an Elizabethan underground — simply brilliant!"
~Norman Dubie

Buy Other People's Lives for your e-reader

Reviews of Other People's Lives 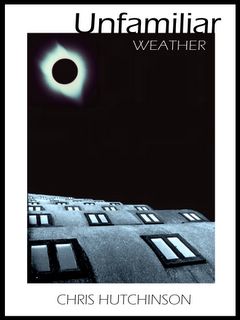 Hutchinson brings a sharp set of linguistic tools to bear on the cities and people that surround him. His poetic project is not only to encapsulate the everyday in words, but also to use words to draw attention to that which exists outside of language. It is this subtlety, along with a keen sense of irony, that allows Hutchinson to examine nothing less than the human condition.
~Alison Pick,The Globe and Mail

Hutchinson honours both the "centre" and the "fringes" - his work has the inclusive, searching authority of Jorie Graham coupled with Heather McHugh's nimble and playful attention to sound. He's in the desert exposed to the elements one moment and stick-handling in a phone-booth the next. Posted by Chris Hutchinson at 11:46 AM No comments:

Posted by Chris Hutchinson at 5:03 PM No comments:

Chris Hutchinson
Houston , Texas, United States
Chris Hutchinson was born in Montreal and has since pursued various livelihoods (cooking in restaurants, working in offices, and occasionally teaching creative writing at high schools, colleges, and universities) in such places as Vancouver, Dawson City, Kelowna, New York City, and, most recently, Houston, Texas. Chris is the author of three books of poetry, and the epic poem disguised as a picaresque novel, Jonas in Frames. He holds a PhD in Literature and Creative Writing from the University of Houston.